There is a considerable controversy around whether investing in a balanced basket of cryptocoins is a good idea.

Two serious sources show that this sort of investment enjoys steady growth without a lot of downturns, cf. DLT10 Index and a recent detailed study which concentrates on a shorter period with excellent returns since Jan 2016 (cf. also this curve for the whole of 2016).

A rebuttal paper was published by Coindesk: over a period of a few years, bitcoin is claimed to outperform altcoins.

I would like to insist on the moral aspect of investment and what it means for the jobs in the technology sector.

By investing in medium-sized altcoins, we make blockchain better and bring a lot of innovation and truly advanced technology to the market: 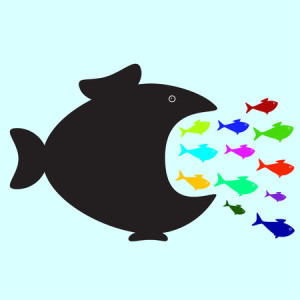 By investing in bitcoin alone, we promote stagnation and poor technology which is barely trying to get better. A dystopian financial network which does not function well. Bitcoin is the “Microsoft of cryptocurrency”, cf. interview by Dr Courtois in Nature, it has a toxic culture, it is owned and controlled by China, it has a bad habit to censor the dissident voices, it uses super-dodgy cryptography, and it is simply sad that bitcoin will at times outperform its competitors.

Notes:
Many properties of bitcoin are self-defeating[Courtois] and lead to a programmed decline of bitcoin for example through skyrocketing fees [+557% in 2016!].  A very interesting curve to study is the so called bitcoin dominance curve. At moments bitcoin dominance reaches a peak [e.g. in Jan 2016 and again in Jan 2017]. Then it will reach a minimum, which happened in mid-March 2016 with the explosion of the Ethereum market. The long term trend is also, well less bitcoin dominance, more place for altcoins, which IMHO are THE investments which create some real value in this market. Let a thousand flower bloom.