Almost exactly 3 years after this, bitcoin network went down to less than 50% dominance, and has nearly lost its capacity to process payments normally.

This can be seen on the following graph for the last 12 months. The curve does not go down to zero anymore. It can no longer keep with the demand of blockchain space to store newly created transactions. If the curve sometimes went down to zero, maybe transactions would eventually be approved. However, the last time the curve was lower than 10,000 was 2 May 2017. As a result there is a permanent huge backlog of payments which are simply no longer executed in any reasonable way. This looks like a permanently saturated network.

One year ago the norm would be to have just a few thousands of unconfirmed transactions waiting for being mined. Knowing that one block  adds some 1000-2000 transactions in 10 minutes, this would mean that you wait for maybe 1 hour for an ordinary transaction to be mined, and that one could reasonably expect it to be mined sooner or later.

Now the situation became MUCH worse: the number of unconfirmed transactions has skyrocketed to 100,000 [later 170,000]. At the same time we still have a strict 1Mb limit on block size because the bitcoin network inability to deliver any sort of sensible reform or upgrade. This means that many users of bitcoin need to wait for DAYS and even WEEKS before their transaction is approved.

Some detailed statistics on waiting time vs.  fee: see Fig. 8 on page 13 of this paper written by a UCL researchers Pappalardo et al. Here is a real-life tool which shows how big are the fees used in unconfirmed transactions for the last 24 hours. And here is an example of a transaction not mined for many days from 8 May and even erased/forgotten by blockchain.info (it was seen on 8 May, it was reported as inexistent/unknown on 22 May, and on 25 May it was claimed to be a recent transaction dated 22 May). In fact something like 20% of bitcoin transactions are NOT mined for 30 days or more, cf. again UCL paper. It is also clear that blockchain.info do NOT report these figures accurately, as it is able to forget a transaction and provides inaccurate timestamps. Therefore the actual figures could be higher.

As the demand cannot be met, fees paid to miners went to the moon as shown on the graph below. 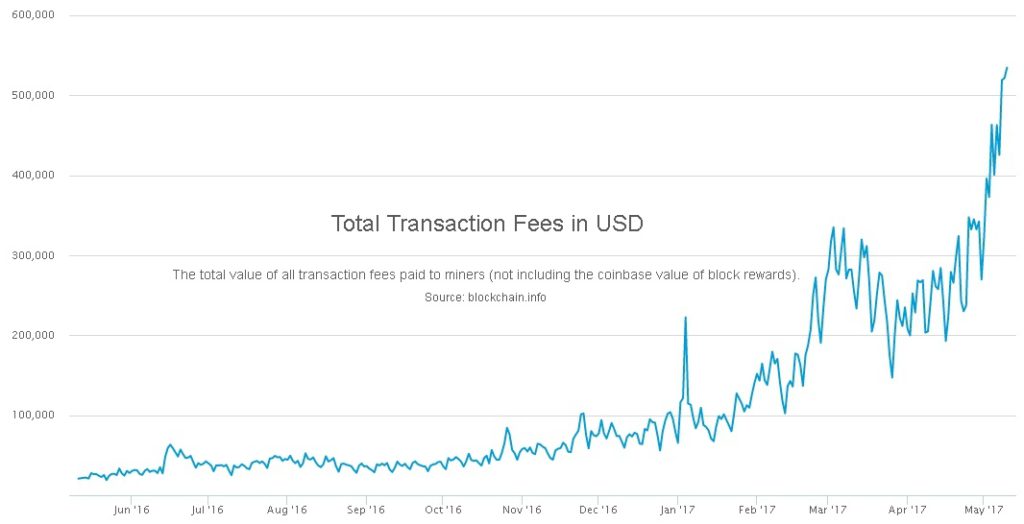 Bitcoin has become a network where economic activity is taxed and a lot of small transaction will not happen at all. Now it is not true that the relative cost of processing compared to the transaction volume has increased, it went down to 0.5%, see this graph. It is rather correct to say that the network can now only handle larger payments for the super wealthy and large transactions are executed, cf. Fig. 7 in UCL paper.

Alternatives are to put an exorbitant fee for your transaction to be mined ASAP (within 10 minutes),  or to replace your transaction and increase the fee – many apps do not allow this and people see their bitcoins stuck in a limbo for days and possibly forever. For ordinary users this means losing their bitcoins – in practice – for example most ordinary users of many mobile apps will not know how to recover their bitcoins from a backup of their private keys and app developers typically do not explain how to do it.

If bitcoin loses in dominance who are the winners? This curve shows that each time in recent 4 years, bitcoin dominance is eroded, clearly, this has coincided more or less with an appreciation of one single currency. First it was Ripple, then Ethereum, and very recently both at the same time [and few other].

This topic comes back in 2020 here. Then again.
As of December 2020 some 20,000 transactions in bitcoin are NOT being approved because the fees are low.  Some real-time data can be found here however many transactions are not relayed very well, and my experience shows that some transactions can be approved 1 month later, or never, and they can be sometimes forgotten by the bitcoin peer network.