Now we’ve covered why privacy is essential for widespread cryptocurrency adoption, and how stealth addresses can help assist the pseudonymity (stealth addresses defined and explained in Part 2, pseudonymity discussed in Part 1), it’s time to explain how to combine cryptography and Ethereum’s smart contract functionality to add another layer of obfuscation to public blockchains!

Ring signatures generally satisfy several essential properties, namely anonymity, unforgeability, and collusion resistance. The definition of anonymity here is that an adversary has no more than a negligible advantage of correctly identifying the individual that produced the signature.

Ring signatures offer honestly participating users with ‘unconditional anonymity’, and are formed without a complex setup procedure or the requirement for a trusted third party, trusted setup, or any form of group leader. Users are simply required to be part of an existing public key infrastructure.

Ring signatures are constructed in a way that the ring can only be ‘completed’, and so will only verify correctly, if the signer has knowledge of some secret information, most commonly a private key corresponding to one of the public keys in the ‘ring’. This is done through a zero-knowledge proof of membership.
In the signature generation algorithm, a number is generated at random for each of the other public keys in the ring, and then the signer uses the knowledge of their own private key, or some other ‘trapdoor information’, to ‘close’ the ring. 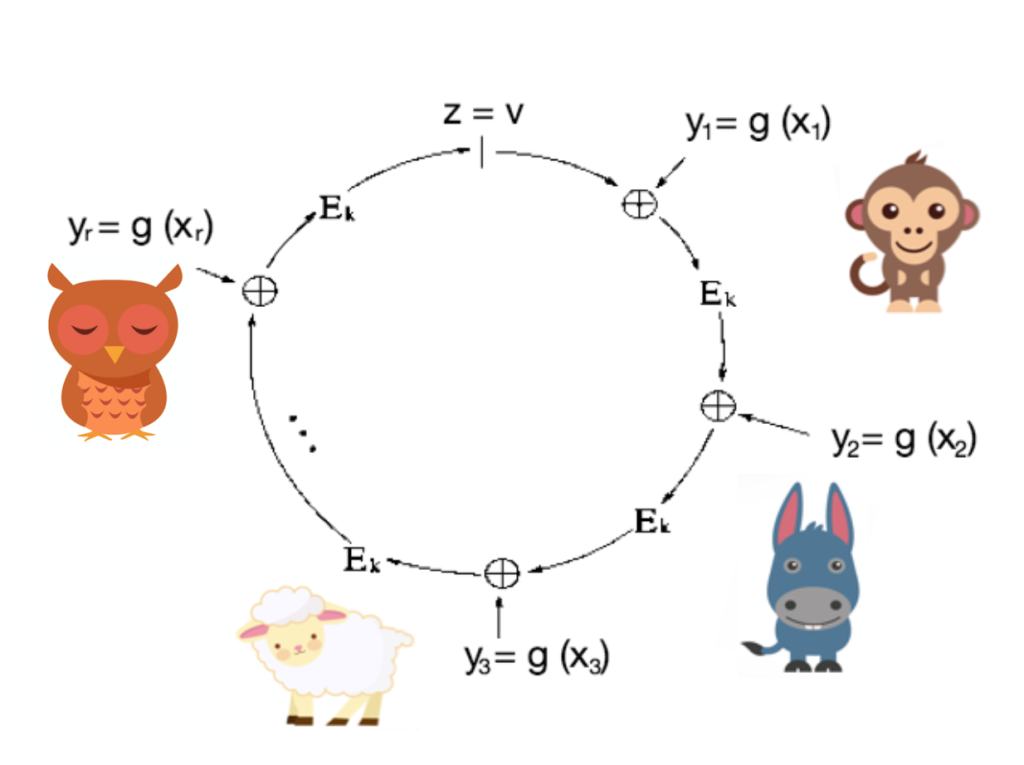 Ring signatures offer users anonymity by hiding transactions within a set of others’ transactions. If there are many users contributing very similar amounts to a ring, then the ring is said to have good liquidity, meaning the transactions can occur quickly, and also that transactions can be effectively mixed, with a high resistance to attempted mixing analysis attacks.

Linkable ring signature algorithms provide a scheme that allows users to sign on behalf of a group, again without revealing the individual signer’s identity, but with the additional property that any signatures produced by the same signer, whether signing the same message or different messages, have an identifier, called a tag, linking the signatures. With this tag, third parties can efficiently verify that the signatures were produced by the same signer, without learning who that signer is.

In our case, we use linkable ring signatures in a mixing contract.

Our linkable ring signature scheme relies on the hardness of EC-DDH, and the general scheme is as follows:

There are grittier details about adding opcodes to the EVM, hashing to secp256k1, indistinguishability and random oracle assumptions, etc, but we’ll gloss over them here!

The combination of stealth addresses and ring signatures makes revealing blockchain anonymous almost impossible (in cryptography the property is generally referred to as infeasibility). Combining these two techniques, we arrive at a scheme that satisfies the following properties:

Now breathe. And please tell me if you hated everything I said or have a million questions or want to let me know I’m wrong in a thousand ways!!!! (Or if more animal pictures are required).